The store will not work correctly in the case when cookies are disabled.
Artikelnummer
LGAOKGGPFDP4
Autor
Masaru AokiHirokazu Sato 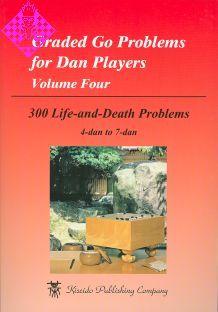 The single most important task for players who wish to reach the higher dan levels ii to develop their ability to read out positions deeply and accurately. The quickest and most efficient way to do this is to solve life-and-death problems. Even though such problems are situated mainly in the corners, the practice obtained working on them will be ex­tremely helpful when you have to read out complicated variations in your games that might take place anywhere on the board.

In a life-and-death problem, there are usually many candidate moves to choose from.

For each of these moves you must consider all of your opponent's responses, and to each of these responses you have to find a counter. and so on. until you arrive at the solution. This entails a lot of mental dexterity that can be developed only by constant practice. and the most efficient way of developing this dexterity is to solve a large number of problems starting out with easy ones and gradually progressing to more difficult ones.

Volume One of this series started out with problems for kyu players. The problems gradually became more demanding of the reader's analytical ability and ended up with problems atthe 3-dan level. This volume starts with4-dan problems and, in the final part. the reader is challenging problems at the 7-dan level.

Honing your skills on these high-level problems is bound to dramatically improve your reading ability.