The store will not work correctly in the case when cookies are disabled.
Artikelnummer
LXWARIYMX3
Autor
Chris Ward 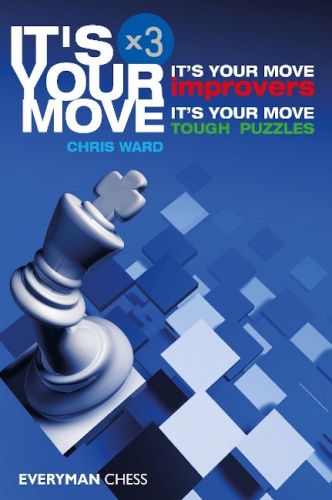 3 Chess classics in one one volume.

This book provides the reader with a selection of puzzles to solve. However, unlike other books of the White to play and mate in three' variety, it simulates real game scenarios, offering readers a choice of tempting alternatives and requiring them to pick the best.

It's Your Move Improvers

In this highly original and instructive test yourself book Chris Ward invites readers to solve a selection of carefully chosen puzzles. In this, the second book in the series, the positions are aimed at improving players, specifically the low level club players who are looking to hone their skills in order to climb further up the chess ladder. The reader is given a choice of five plausible plans for each position and has to decide which is the most likely to succeed. The answers then identify the most promising plan and explain why the other choices are less attractive.

It's Your Move Tough Puzzles

Feeling up to a challenge? In this highly original and instructive self-test book, Grandmaster Chris Ward presents a selection of carefully chosen puzzles to solve. Hot on the heels of his very successful It's Your Move and it's Your Move Improvers, comes It's Your Move: Tough Puzzles, which this time aims to rack the brains of even the most experienced chess players. The puzzles might be a bit more difficult this time but, in the same style of the previous two books, the reader is once again helped by the choice of five plausible plans and has to decide which is the most likely to succeed. The answers then identify the most promising plan and explain why the other choices are less attractive. Instead of opting for the traditional 'check, check, mate ... mate!' type of puzzles, Ward concentrates on situations which are much more likely to occur in practical games.