One-hundred-and-one of my best games of chess 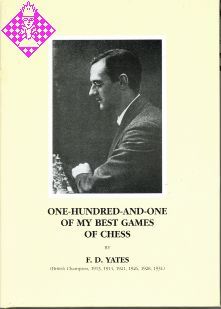 When Mr. Yates first informed me of his intention to compile a collection of his own best games I little thought that it would fall to my lot to complete the work as a " Yates Memorial Book." There has been a certain melancholy satisfaction in ensuring that these fine examples of our great player's style shall not be lost to the chess world, and I am confident that players of all grades will find both pleasure and instruction in playing them over.

Yates' full strength did not develop until after the war and consequently the examples of his earlier play have been limited to eighteen as compared with ninety of his later games. As regards the selection itself, at the time of his death Yates had completed the annotations of thirty games and had also collected a further large number which were found among his effects, but had not yet been provided with notes. Consequently the games chosen are those which Yates himself considered as the best examples of his style. The thirty games annotated by Yates are indicated in the text, the annotations to the remainder being by myself.

The games have been arranged according to the class of event in which they were played, commencing with Inter­national tourneys in chronological order, Team tournaments, British Championships, other British tournaments, personal matches, cable matches, and miscellaneous games. This last section is of necessity very limited owing to Yates' unfortunate habit of destroying the scores of his games immediately after they were played. Consequently many fine examples played in inter-club and county matches, etc., have never seen the light of day...