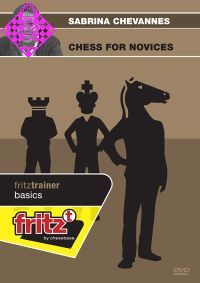 This DVD is for anyone who knows the rules of chess but would like to be able to improve their game with some specific tactics and strategies. It builds on the basic principles of chess that should have already been learnt. However, there is also an introductory chapter for those that may have gaps in this part of their foundation. The main part of the DVD is split into four chapters:

Opening - The general principles of the opening are discussed here. No specific opening repertoire is suggested but a guide of how to tackle any opening and come through the first stage of the game in a better position.

Middlegame - Some basic tactical devices are introduced such as the pin, fork, skewer and discovered attack. These devices are used throughout the levels of chess and even top grandmaster games are won from a basic device as these.

Ending - The basic checkmating technique of the most common endings that occur in novice games are instructed here. These techniques are essential to master before continuing with more complex checkmates.

Test - The DVD finishes with a test chapter which consists of 20 exercises based on the information discussed throughout the DVD. Each exercise allows time for you to pause and calculate the answer before the answer is discussed. This DVD is a must for anyone who wants to improve their game, whether they are a junior or an

Sabrina Chevannes has over 13 years classroom teaching experience and is the director of a successful teaching agency in London called the Chevannes Chess Academy.

She has over 300 students, including many national representatives. She is also still an active chess player and plays in the ‘ England Ladies’ team.