The store will not work correctly in the case when cookies are disabled.
Artikelnummer
LMSOKCMS
Autor
Ivan Sokolov 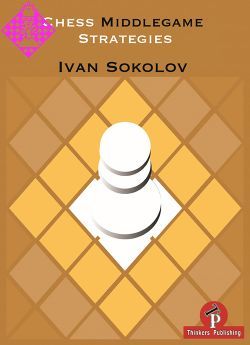 After his outstanding book from 2008, "Winning Chess Middlegames", Grandmaster Ivan Sokolov takes us a step further into his dungeon of middlegame skills. In his well known style and entertaining book, he focusses on the different aspects of the complex middlegame.

As usual Ivan breaks new ground and provides us with a varety of instructive examples. Many were extracted from the very recent top level tournament practice. Volume 2 will be published later in 2017.

'Winning Chess Middlegames" - written 9 years earlier - and its German language translation bear no resemblance to this new work. In 'WCM' the material is divided in 4 chapters according to 4 basic pawn structures, while in the author's recent work (9 chapters) only chapter 4 'minority vs majority' is set along the pawn structure lines (not being dealt with in the previous work). 'Chess middlegame strategies' deals with 'strategies' not 'pawn structure based' - Simply a very different work.

Ivan Sokolov was born in Bosnia in 1968. He was and still is one of the most flamboyant attacking players of his time, reaching several times, over a period of 13 years, the top 12 spot in the FIDE ranking. He notably has beaten world chess champions like Smyslov, Kasparov, Kramnik, Anand and Topalov. We remember him winning most recent the World Open in Philadelphia 2012 and the gold medal for best performance at the "European Teams" in Warsaw 2013. He is a successful writer with bestsellers as "Winning Chess Middlegames", "The Ruy Lopez Revisited", "The Strategic Nimzo-Indian" and "Sacrifice and Initiative".

His colums in the last Chess Informants are also widely appraised. This is his second book for Thinkers Publishing after he published his biography "Ivans´s Chess Journey". He is currently beeing employed in Iran as a national team coach.

The ‘work database’ collection for this book which I started about two years ago meant the initial plan was for just one volume on Chess MiddlegameStrategies.

However, the way my work and material built up and progressed, it soon became obvious that this ‘one volume’ would be approximately 500 pages long - so, the decision was taken to split the material into two volumes. The second volume is planned for the second half of 2017.

In this first volume I have annotated 37 games representing different aspects (chapters) of ‘chess middlegame strategies’.

Readers will see that the vast majority of the games selected belong to the works of ‘contemporary artists’.

Notwithstanding the ‘traditional/golden classics selection’, I preferred to use the ‘contemporary learning examples’ feeling that: A) younger/middle generation reader will more easily associate with them and B) they perfectly mirror the middlegame strategies used in modern top-class chess (i.e. today’s chess at the highest level).

Opening play is in general not the subject of this book, although I did pay attention to opening ideas in the cases where I felt I had something useful to say on the subject (in the particular game selected).

The aim of this book is to offer the reader a spectrum of middlegame ideas/strategies, thereby inspiring and improving their practical tournament play.

Besides this book’s ‘practical aim’, I hope that the reader will also gain purely aesthetic pleasure from playing over the games selected (and variations given).