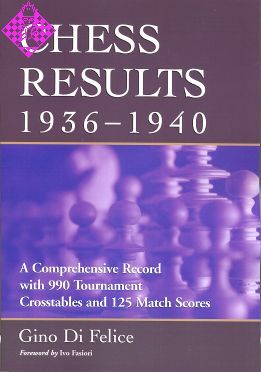 This comprehensive chronological reference lists the results of men's chess competitions all over the world. From the famous to the lesser known, both individual and team matches from 1936 through 1940 are remembered here. Entries record location and, when available, the group that sponsored the event. Both first and last names of players are included whenever possible and are standardized for easy reference. Compiled from contemporary sources such as newspapers, periodicals, tournament records and match books, this work contains 940 tournament crosstables and 210 match scores. It is indexed by events and players.

This work documents the results of the main chess competitions that took place all over the world from 1936 through 1940. Previously, Gaige's excellent four volumes of Chess Tournament Crosstables stopped at 1930.

In Chess Tournaments: A Checklist, Gaige lists a series of tournaments in the period 1931-1940, whose crosstables he indicates he possesses for the most part; so far, however, he has not published them. They number, by my count, 1364 crosstables (for 1931-1940). I have found most of those listed, as well as many more; my two volumes of Chess Results for 1931-1940 include 2055 tournament crosstables.

My research for the present volume focused primarily on the most important magazines for the 1936-1940 period; I would like to thank the Koninklijke Bibliotheek in The Hague for allowing me to gather much of the material. Even more is left to do, so I hope my efforts will encourage others.

Women's and correspondence competi­tions have both been excluded in the present volume, with the thought that they can be the subject of separate works.

Standardization of full names was deemed essential, since various sources carry different spellings for a player (because of different alphabets, transliterations, translations and pronunciations across countries): Gaige's Chess Personalia was the basis for this process.

Whenever possible, for every contest I report the place where it was played, together with the nation in parentheses, partial or full dates and the name of the event.

Events played between different years are inserted into the year they came to end: for example, results of tournaments that began in 1936 and ended in 1937 are placed at the beginning of 1937.

The book is completed by a list of sources, an index of events (in chronological and alpha­betical order) and an index of players.

Many thanks go to my dear friend Ivo Fasiori for the advice that brought this work to its final draft.