Chess Success: planning after the opening 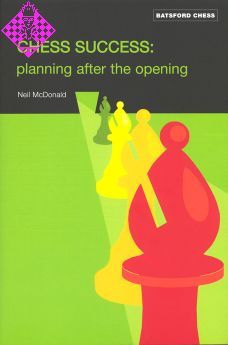 International grandmaster and trainer Neil McDonald knows only too well the difficulties players have in coping with masses of chess theory: 'Everyone learns variations in the openings, but rarely do they pause to reflect on the connection between the moves played and the underlying strategic demands of the position. Instead it's moves, moves and more moves.'

His solution? Assess each of the openings by its particular pawn formation - which wiil unfailingly direct you to a compatible course of action. In this essential guide, the author devotes chapters to the various structures - open, closed, symmetrical, exchange - with further discussions on Indian fianchettos, Sicilian hedgehogs, d5 square dilemmas and Dr Jekyll and Mr Hyde isolated queen's pawns.

Over 40 games are covered in depth with the author's trademark move-by-move commentary, showing you how to handle that stage of the game when the opening phase is over, and the time for attack has only just begun...

So why do we need a long term plan? Didn't Capablanca show that you can become World Champion by taking it easy and playing natural moves?

If your philosophy is 'put pieces on good squares and don't worry about an overall plan or tactics!' you are in effect playing Russian Roulette. Sooner or later someone will be mopping bits of brain off the chess board, which is bad news even for someone who doesn't like to think too much.

Even if you have a good intuition when it comes to picking moves with the capacity to be good, in each position as a game progresses you will probably encounter five or more moves that 'look right'. Sooner or later you will pick one that 'looks right' but is actually a disguised tactical/strategical blunder.

Capablanca is dead; and the rest of us need to play with our brains as well as our hands.

Having said that, we can make things a lot easier for ourselves. Everyone learns variations in the openings, but rarely do they pause to reflect on the connection between the moves played and the underlying strategic demands of the position. Instead it's moves and moves and more moves! But surely a grasp of the chess principles at work would not only make you a better player but also make the learning of theory easier and more enjoyable.

In Chapter Six we shall see that even the great Steinitz, the first World Champion, is clueless when confronted with an unfamiliar pawn formation. So you might think that there isn't much hope for the rest of us.

Fortunately (or unfortunately if you wanted to be a pioneer yourself) more than a century has passed since Steinitz played his chess. That's an awful lot of tournament and match chess. The never ending 'arms race' of ideas, (or less grandiosely trial and error) has bequeathed to modern players the knowledge of how to play various pawn structures.

In writing this book I've tried to take a step back from opening theory: to forget for a moment the endless reams of analysis of the Sicilian and King's Indian, and simply ask myself: what does the pawn structure require - and how does the placement of the pieces, including the king, 'warp' this requirement?

Move by move coverage has been given to the most important phases of each game, during which the long term plan unfolds. Sometimes the game is of such value that every step along the way after the opening has been carefully considered.

I hope you enjoy the games. Let me wish you a lot of success and joy in learning the art of strategy from these great minds.

007Chapter One: The smiting style

187Chapter Seven: The dilemma of d5