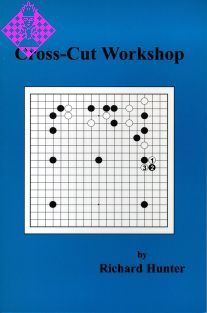 What is this then? Who needs a book about the cross-cut? Everyone knows the proverb: "Cross-cut? Extend!" You don't need to think any further.

Well therein lies the problem. You see, although the proverb is very useful for beginners, it doesn't tell the whole story. Many people are blinded by it and fail to look any further. Actually, it represents the tip of the iceberg. There are numerous answers to the cross-cut, but many people never consider any reply except the extension.

This book presents the basic cross-cut patterns with examples, and rounds off with review problems to test your understanding. The level is suitable for kyu level players, but even dan players may find something new here. The contents grew out of Richard Hunter's studies: while going through a large number of next-move problems, he noticed that the extension was seldom the answer to a cross-cut problem. His suspicions were confirmed by watching advice from two professionals on TV. This book presents the results of these studies.

The cross-cut has a fearsome reputation among weaker players. All too often a stronger player will use it to gain a decisive advantage. A weaker player might think: 'Once bitten, twice shy', and even back down from a fight the next time. And White often plays a cross-cut even when it's not the best move, because it has a good chance of being answered wrongly. This book shows you how to overcome your fear and ignorance and answer the cross-cut appropriately. Study it and you should boost your winning percentage.

The contents are based on my series of articles published in the British Go Journal, starting in Autumn 1993, and reprinted here with permission from the British Go Association. While the Journal is read by some people in other countries, the readership is undeniably limited. I'm delighted to have this opportunity to make this material available to a wider audience and I'm most grateful to Gordon Fraser and the Company Slate & Shell. I'd like to thank Brian Timmins, who was the editor of the British Go Journal at the time, and his team of helpers for putting my ideas onto paper. The material in this book includes the complete contents of the BGJ series plus a dozen extra problems for practice. I've also corrected one or two minor errors and the material has been completely reformatted. The series was appreciated by British Go players and was also reprinted in translation by the French Go Journal. I hope you find it useful too.

There are plans to follow up on this book with some of my other series, for example, those on the monkey jump and on counting liberties.