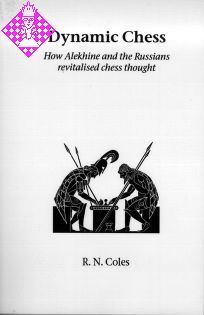 This scholarly essay in intellectual progress over the chess board shows how the pessimists who thought chess played out - destined to become victim to the death of a thousand draws - were refuted by the dynamic risky games of Alexander Alekhine, whose legacy lived on in the games of Soviet and Russian Champions such as Mikhail Tal. With Computers taking an ever increasing role in modern chess and challenging the modern Champions Kasparov and Kramnik, the author's thoughts on the inexhaustible creative potential of chess assume even greater significance.

When that most fascinating of chess writers, Richard Réti, showed in both his Modern Ideas in Chess and his Masters of the Chessboard that the development of chess ideas could be seen to follow a continuous pattern, he hinted, without being able to view the matter through the perspective of time, that in his own day evolution of ideas was giving place to a revolution in ideas. Had he, the chronicler of the Hypermodern Revolution, not died prematurely in 1929, we might well have had a later and more profound judgment upon the events of the revolution in which he himself took no small part.

As it is, the story has till now remained unwritten, and in this book I have endeavoured to go some of the way towards filling the gap. We are now able to view the Hypermodern Revolution as a stage between the old Classicism and the new Dynamism. Considered thus, its various features fall into place, and while some of the things which Réti and Nimzovitch thought important are indeed important, others on which they laid great stress can be seen to be in fact no more than side-issues.

The book is concluded with a considerable selection of the most modern examples of the new Dynamism, and though, as always when dealing with contemporary matters, some of the emphasis may later prove to have been misplaced, there is certainly no doubt that the Russian masters follow the Hypermoderns with the same pattern of continuous development as Réti himself noted in earlier generations. I hope that the juxtaposition of the ideas of the two periods will help to illuminate the scene both forwards and backwards, and by indicating the direction in which ideas are moving thereby make them easier of comprehension.