The store will not work correctly in the case when cookies are disabled.
Artikelnummer
LXKEEHTBGK
Autor
Raymond Keene

How to beat Gary Kasparov 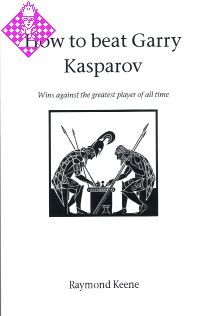 Win against the greatest player of all time !

Even Kasparov is human. This book analyses all of his major lost games up to 1990 and tries to draw common conclusions about how to defeat the very greatest. Gary Kasparov won the World Championship in 1985 and successfully defended it against his perennial rival Anatoly Karpov in 1986-1987 and 1990. In 1993 and 1995 respectively, Kasparov beat off challenges from Nigel Short and Vishy Anand. In 2000, Kasparov's third title defence in London, he eventually succumbed to a fresh challenge from the Russian grandmaster Vladimir Kramnik.

Raymond Keene is a British Chess Champion, and the first British Player to achieve a FIDE (World Chess Federation) Grandmaster norm. He was awarded the OBE for services to chess in 1985. He is Chess Correspondent of The Times, The Sunday Times, The Spectator, and The International Herald Tribune. He is a prolific authorofchess books, several ofwhich are c l assics of the genre. He has organised three World Chess Championships.

015 Merit in Moscow - Trauma at Tilburg

029 On the path to the World Championchip

089 From London to leningrad