The store will not work correctly in the case when cookies are disabled.
Artikelnummer
LOUHLFDPP
Autor
Wolfgang Uhlmann 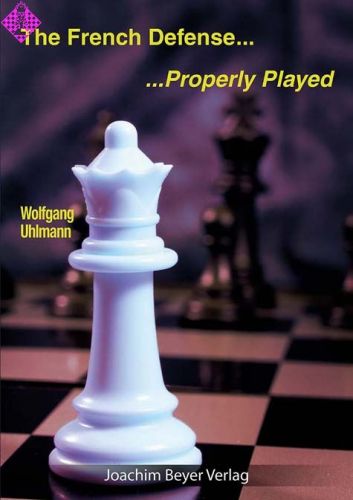 The French Defense (1.e4 e6) caught the attention of the chess world in the first half of the 19th century, and has developed to be one of the most important and popular openings. The author of this book, the German Grandmaster Wolfgang Uhlmann, is a world-renowned expert who has tested this opening and enriched its theory over his entire career. 76 selected games (mostly his own) document the considerable success he has achieved with his favorite opening, often against the strongest opponents. The theoretical remarks integrated into the annotations provide the reader with well founded instructions for the treatment of this opening.

It was not the author's goal to present a complete survey of all the systems and lines that build the French Defense but instead to put the positional evaluation and the creation of a plan in the foreground. At the same time this compilation traces the career path that the author has taken with his favorite French lines. Uhlmann's work is now available in the 4th updated and amended edition. In particular, the author has added five more recent games by other French specialists to the collection.

Grandmaster Wolfgang Uhlmann (born in Dresden in 1935) was the strongest player of the GDR from 1958 to 1989 and participated in 11 chess Olympiads (10 times at the top board). At his peak, he belonged to the world's top players and celebrated outstanding successes in many national and international tournaments. And last but not least, he was active for many years in the German top league (Bundesliga) and has made a name as the author of numerous publications.