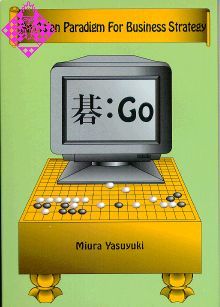 Can the success of Japanese business strategy be explained by the ancient Asian game of Go?

According to the author, a top-ranking Japanese executive and 3-dan Go player, it definitely can.

In chess, Go's Western counterpart, the object is to destroy your opponent's pieces, then eliminate his king - destroy your competitor.

In Go, you co-exist with your opponent and try to control the greater amount of territory - strive for greater market share. That Go is a paradigm for decision making is almost a cliche' in Japan. For that reason it is played by politicians, bureaucrats, as well as businessmen. The membership list of Japan Go Association can almost double as a directory of the top names in the Japanese business and political world. The chairman of that association is Asada Shizuo, ex-CEO of Japan Airlines, and its president is Watanbe Kazuo, ex-CEO of Tokyo Marine and Fire Insurance.

What is Go and how is it played?

Go is an easy game to learn. The playing pieces are of one kind and the rules are few and simple. The essence of Go can be stated in just for sentences.

In this book, Mr. Miura explains in detail how to play and how its strategies can give you a fresh approach to the competitive world of business.

230 Star I: The Competitions

262 An Example of Capture in a Game

264 Determining the End of the Game