The store will not work correctly in the case when cookies are disabled.
Artikelnummer
SCOSHITRL
Autor
Alexej Schirow

Guide to the Tkachiev Ruy Lopez 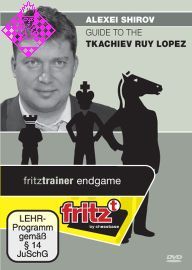 The variation against the Ruy Lopez presented in meticulous detail by Alexei Shirov (3...a6 4.Ba4 Nf6 5.0-0 b5 6.Bb3 Bc5) has so far had no recognised name and Shirov himself has named it after Vladislav Tkachiev, the 2007 European champion, the Tkachiev Ruy Lopez. In fact the grandmaster from Kazakhstan has played a few important games with this system, but it would have been just as justified to name the variation after our author himself, because since 1996 Shirov has not only played numerous games with it, but recently he has turned it into his main weapon against 1.e4 - with splendid success and a lot of imitators. The super grandmaster now shares all this collected knowledge with his viewers. Apart from the Exchange Variation (to which Shirov also devotes a model game) White has hardly any serious deviation after 3.Bb5, making of the Tkachiev Variation a good weapon against the Ruy Lopez. Video running time: 6 hours.

Alexej Shirov was born in Riga just like world champion Mihail Tal, and also his playing style reminds many chess fans of the young Tal. In the beginning of the 90ies, a comet-like rise brought the young Latvian to the world top within the shortest of time.

Being no older than 22 years, he already had an Elo rating of nearly 2750 and belonged to the absolute elite. Since then Shirov has been one of the best players in the world, delighting all chess fans with original and amazing ideas on the board.