The store will not work correctly in the case when cookies are disabled.
Artikelnummer
LXEKMJET
Autor
Frederik Ekman 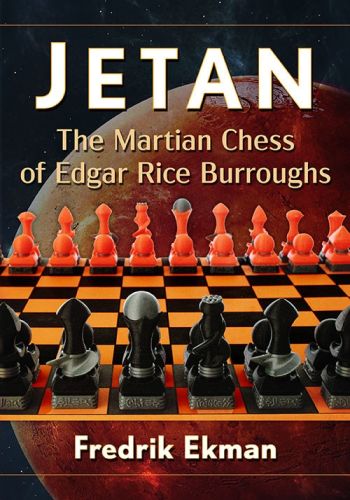 Throughout its hundred-year history, the game Jetan has influenced many writers and game designers. Invented by author Edgar Rice Burroughs for his 1922 novel The Chessmen of Mars, Jetan has been played by enthusiastic fans and serious gamers alike.

This first-ever book on Jetan explores the game’s rules in depth and provides new interpretations based on up-to-date research. It chronicles the game’s history, explores tactics and variants and provides a complete standard for notating games. Also included are three annotated Jetan playthroughs and several practice exercises. Over 80 diagrams and photographs are used as illustrations, and an essay about Edgar Rice Burroughs’ lifelong interest in sports and games further contextualizes the game.

043 3. Games and Sports and Burroughs

185 Appendix I: The Original Rules of Jetan

192 Appendix III: The Rules of ­­Jetan-Sarang