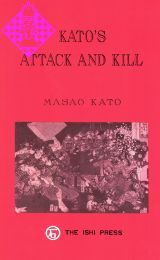 Attacking enemy stones is one of the most basic elements in any game of go, yet surprisingly little has been written about the theory of attacking. Methods of attack, selection of a target, timing, contriving a double attack - these are techniques which require a lot of trial and error to master.

" Kato`s Attack and Kill" offers an invaluable shortcut. The author, Kato Honinbo, is known and feared as one of the most aggressive attacking players in modern go and in this book hepresents a thorough and practical analysis of all the elements essential for a successful attack. There are numerous examples from actual play, a problem section, and a selection of Kato`s own games wich feature attacking and killing large groups. Reading this book will transform your game.

The cover: a print by Kuniyoshi (1797 - 1861). Collection of William Pinckard. Photography by James McDonald.

001 CHAPTER I: THE FUNDAMENTALSOF ATTACK