The store will not work correctly in the case when cookies are disabled.
Artikelnummer
LOKEIKOTL1NC3
Autor
Harald Keilhack 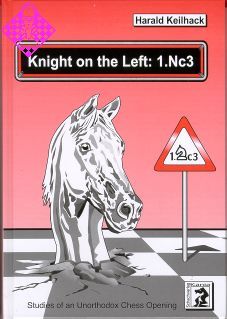 This is the first full-length book about this interesting opening, unfolding a complete theory of 1.Nc3; including several offbeat lines against semi-open defences like the Alekhine or the Caro-Kann. The author thoroughly explains the basic structures which supply huge scope for creativity. There is broad discussion of move order subtleties and

transposition issues, so that the book deepens your understanding of opening play in general!

"If you have a liking for the unusual and daring, you will probably not find many books this year that are better than this one!"

This book covers the opening 1.Nc3. Opening? - Oh, yes! Many consider 1. Nc3 to be just a move, which might be playable, but "hardly has any independent value", rather transposing to 1.e4 systems.

In this context, Khalifman's five volume opus 1.Nf3 - Opening for White according to Kramnik springs to mind. In an odyssey of more than 1300 pages, the former FIDE world Champion proves that the "knight on the right" 1 Nf3 is a good move, but not an opening in itself! He doesn't at all cover the Reti (with which 1.Nf3 is usually connected), but a multitude of openings including the King's Indian, the Queen's Gambit (Slav, Orthodox, Accepted etc), the Dutch Defence, the English Opening and even some lines of the Sicilian (namely the Maroczy setup against the Accelerated Dragon); besides, some peculiarities like the Grünfeld without d2-d4. Quintessentially, 1.Nf3 is presented as a very subtle transposition tool, by which - to simplify a bit - undesirable lines of the aforementioned openings can be excluded.

So, how are matters after 1.Nc3? There's a bunch of established independent concepts, e.g. after 1.Nc3 e5 2.Nf3 Nc6 3.d4 or 1.Nc3 d5 2.e4 d4 3.Nce2. It's mostly possible, but not always advisable to stay clear of all transpositions. Typical questions that a 1.Nc3 practitioner will face are:

Or strive for the very tricky indepen­dent lines, keeping the option of e2-e4, transposing to some Standard lines, as an "emergency exit" in reserve? In fact, every leading 1.Nc3 player has his own answers to those questions. Trans­positions at a later stage are full of subtleties, which will be revealed in this work. If one wants to switch from 1.e4 to 1.Nc3, this is even an advantage: you may start by playing 1.e4 e6/c6/Nf6 2.Nc3 (reaching some lines from Chapter IV), later on you play 1.Nc3, firstly transposing quite often to 1.e4 systems, then less and less.

This book covers every possibility after 1.Nc3 which at least has some indepen­dent value. Additionally, some "secret" lines which belong to 1.e4 openings but in practice occur more often via 1.Nc3, or which have some features of this opening. For example, such Anti-Caro-Kann lines as 1.e4 c6 2.Nc3 d5 3.f4 or 3.Qf3!?. Typically such lines are neglected in opening manuals.

Unlike unorthodox openings such as 1.b4 or 1.g4, 1.Nc3 by no means compromises White's position, and at the same time it doesn't limit the first player to some extravagant strategy or other. On the contrary, this move is in perfect harmony with classical principles of opening play like development and gaining influence on the centre (keeping an eye on e4 and d5). Therefore, it sounds strange that 1.Nc3 is not yet recognised as an opening in its own right. Admittedly, the c-pawn is blocked, but in every opening, every move kills off some option or other.

Actually, 1.Nc3 offers exceptionally good possibilities of winning a miniature, thanks to knight tactics and supported by the accelerated development of the minor pieces. The older 1.Nc3 literature almost reads like a collection of traps and miniatures. However, the general level of chess is increasing, and one cannot expect that the average player of our day will repeat the errors that some semi-celebrities of the past committed - not to mention modern computer-aided correspondence chess. So, this book isn't at all about cheap traps but will establish a deep theoretical and strategic basis for the further exploration of the Knight on the Left.

I was attracted by the unique hybrid stat­us of a so-called "unorthodox" opening which has nevertheless so many lines which connect to traditional openings. 1.Nc3 is still labelled as an "unorthodox" opening and accordingly, it's treated poorly in main-stream publications like Encyclopedia of Chess Informant. On the other hand, many positions which arise can only be reliably assessed when one compares them carefully to related, but well-explored positions from Standard openings. Often enough, enthusiastic amateur authors of books about unorthodox or gambit openings are lacking in general knowledge of standard positions, which results in blatant misjudgements. In this book, I do my best to transfer knowledge between these two, so different, worlds. This also includes, by the way, comparisons to positions with colours reversed, which often allow striking insights.

I agree very much with the maxim that if a given position can occur in various places (via transposition), all relevant games and analysis have to be presented together. This necessarily leads to a huge number of cross references. Whenever various move orders can lead to the same position, I have tried to figure out which one is most precise for both parties - sometimes this wasn't easy at all (e.g. in Section 17). Unfortunately, for instance, Dunnington's book is rather sloppy in this respect.

"Between Worlds" was also a maxim when choosing games from corre­spondence as well from over-the-board chess, from grandmaster as well as from amateur practice. This was the case too in my methodological choice to keep the sample game approach (with deep strategic explanations), but at the same time to supply dense theoretical coverage. The fact that this book has expanded to nearly 400 pages should not distract from the fact that even with today's knowledge some fundamental issues around move 5 are still unresolved. With regard to possible future discoveries I haven't cut off lines that have to be regarded as unfavourable from today's point of view.

1.Nc3 was first mentioned in the 1st edition (1843) of "Bilguer - Handbuch des Schachspiels" by Tassilo von Heydebrand und der Lasa. According to Adrian Harvey/Stefan Bücker (Kaissiber 15), the first recorded 1.Nc3 game was Kieseritzky-Desloges, France 1847 (p.21). The game Napoleon-Madame de Remusat, Malmaison Castle 1804 (p.10), is probably a hoax. Later on, 1.Nc3 was occasionally tried by world class players, e.g. Blackburne-Noa, London 1883, or Bogoljubow-Zubarev, St.Petersburg 1925. But these were solitary cases, comparable to Morozevich-Kasparov, Frankfurt 2000 (see Game 83) in our own days. It is not the Professionals, but rather enthusiastic amateurs and grandmasters of correspondence chess who have advanced the development of this opening. Thus, about 1910 the Czech Johann Kotrc started to play 1 .Nc3 regularly, as did some years later Ted Dunst from New York. After 1945, the Baden master Leonhard Hanke attracted attention by playing 1.Nc3 in southem Germany. Further progress is closely connected with the contemporary heroes mentioned below.

The opening 1.Nc3 has had many names; it is possible to say that everybody who wrote about it has used his own name. So, there had been, among others, the Romanian, Kotrc, Dunst, Sleipner and the van Geet Openings (to mention just the most widespread ones). Finally, I opted for the neutral Linksspringer or Knight on the Left, which was preferred by my mentor in chess publishing, the Randspringer editor Rainer Schlenker.

From about 1965 up to nowadays, two outstanding correspondence GMs have been setting the trend: Ove Ekebjaerg, Denmark, and Dick van Geet from the Netherlands. The extrovert Dutchman has published articles, booklets and a CD about the "Van Geet Opening". In his work, tactical finesses prevail. Of the reclusive Dane, however, hardly anything is known beyond the game scores themselves. But his games are of unique strategic depth.

In the 14th correspondence world championship 1994-2000, Ekebjaerg came close to his greatest triumph: he scored 10 1/2 out of 14, including 6 out of 7 in his games with White, opened exclusively with 1.Nc3, and almost looked like the sure winner. However, in the end Tinu Yim from Estonia, who finished his games years later due to longer postal delivery times, overtook him by half a point. Besides van Geet and Ekebjaerg, other correspondence GMs including Sarink, van Perlo and Hector regularly start their games with 1.Nc3 (and there are only about 200 corr. GMs); and besides them, numerous corr. players around 2400 too - one could almost talk about a "corre­spondence chess opening"! In over-the-board chess, one will repeatedly meet names like, IM Mestrovic, IM Sydor and (again!) IM van Geet, see for instance his draw against the then world champion Spassky (Game 14). Nowadays, 1.Nc3 is occasionally used by modern grandmasters like Bellon, Buhmann (soon to be a GM), Ermenkov, Hector (again! - he has both titles), Cs.Horvath, Narciso, Rashkovsky, Rogers, Schmaltz (limited to 1.e4 d5 2.Nc3), Wi.Watson; all of these have a well-earned reputation as unprejudiced players. Other names include Dutch followers of van Geet, namely Jongsma, Leeners, van Bellen; the 1.Nc3 scene from Tübingen (Frick, Schlenker, Moser and others) or the Estonian master Aarne Hermlin. And finally Anker Aasum from Norway. His book, while being somewhat dated with regard to pure theoretical issues, contains a lot more historical Information, including numerous short biographies of enthusiastic 1.Nc3 players (or rather 1.Nc3 riders, as Aasum uses to say).

'Knight on the left' is a translation of Keilhack's German book ‘Der Linksspringer' which we reviewed a small two years ago.This English translation is completely revised and updated till August 2005,where IM Harald Keilhack did manage to hold the structure of this book with the 99 move to move model games as much as possible untouched, so the latest developments of The van Geet must be found between the lines of these games. The pleasant side of this book is that you shall find material in this book that has seen no publication before, not even in the latest ChessBase openings CD on 1.Nc3! For example: 1. Nc3 d5 2. e4 d4 3. Nce2 e5 4. Ng3 Be6 5. Nf3 f6 6. b3 Nc6 7. Bc4 Bxc4 8.bxc4 d3 9. Nxe5 fxe5 10. Qh5+! has seen some light in the obscure gambit magazine RandSpringer from the gambit expert Rainer Schlenker. Interesting to mention is that there are 11 complete move to move games from the inventor of this opening Dick Van Geet and 12 from the great 1.Nc3 expert Ove Ekebjaerg, who nearly outplayed the future worldchampion correspondence chess Hamarat with this knight move! Please see game 50 of this book. Included is also game 83 of this book Morozevich - Kasparov 1.Nc3 c5 2.d4 cxd4 3.Qxd4 Nc6 4.Qh4 Nf6 where I would like to mention that Kasparov was not aware of the superior possibilities of 3 ... e6! and 4..d5! Interesting enough the English edition is a small 16 pages smaller and that comes that the German language needs more space and Harald Keilhack did leave out in this English edition some non-essential things. Conclusion: This book is truly overloaded with 1.Nc3 openings tips!