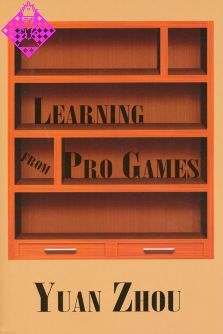 Go players who want to become stronger are widely encouraged to study professional games. However, weaker players, especially kyu-level players, often find it difficult to learn anything by studying pro games. There are many commentaries on pro games designed to clarify what is happening, but unfortunately, these are almost always aimed at strong players and in many cases at other pros. All too often there are long sequences about which no comment at all is made. Hence most commentaries are only confusing for weaker players and are more discouraging than useful.

The need for commentaries on pro games that will help weaker players not only to understand but also to learn how to benefit from studying the games is acute. It is this need that Yuan Zhou aims to meet in this collection of commentaries on famous professional games. They were originally presented in workshops by Zhou, who was encouraged by the participants to make his commentaries available to a wider audience.

Zhou has a special talent for explaining go to weaker players. Although he is one of the strongest amateurs in the American Go Association and has represented the USA in a number of international events with good results, Zhou is a master at clarifying the intricacies of go for weaker players. He has done this in the many books he has already published, but in this case he is especially focusing on showing weaker players what they can learn from studying professional games. Zhou emphasizes that the key step is stopping after every move and deciding where you would play next and why. Then see where the pro plays and think about why. Thinking about the game this way puts you in a position to learn from the pro's play. If you just look at the pro's plays without thinking about the situation first, you will miss most of the value of studying pro games. Of course, pros do occasionally make mistakes. So you must pay attention to how the game is going so that you can detect where a player has made a slip.

The games Zhou has chosen for this book are by top players in major events, games that are famous for the very high level of go they illustrate. In Zhou's hands the games become surprisingly useful lessons for weaker players in how to play the game.