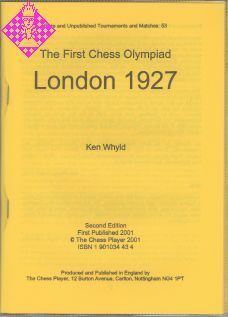 Chess Olympiads for the Hamilton Russell Cup, held every other year, are among the most popular of chess events, and this is where it all began.

During its inaugural congress at Paris in 1924 the Federation Internationale des Echecs (FIDE) ran a number of tournaments. Perhaps because all of this happened in the same city and at the same time as the Olympic Games, the results were also calculated by nationality to produce a kind of league table of the nations. It was meaningless as a competition. There were between one and four players from each country, and they could be pitted against their own nationals. In any case, most of them were there as negotiating delegates rather than players. Even so, there was a lively response. Some of the tower-placed nations stressed that their teams' were without any official status, other countries protested at being excluded. Germany and Austria were not invited, perhaps because it was too soon after the end of the First World War. The USSR was not there either, but two exiles played as Russians. FIDE was formally constituted at Zurich in 1925, and at its next congress, Budapest 1926, ran a team tournament, over four boards, between four countries. It was announced that the Hon. F.G. Hamilton Russell had donated a cup for the international team tournament to be held the following year in London.