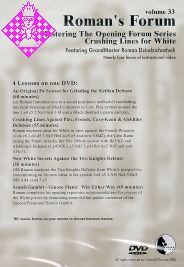 4 Lessons on one DVD:

An Original F4 System for Grinding the Sicilian Defense (60 minutes)

Let Roman introduce you to a sound positional method of combatting this most fearsome of Black´s answers to 1.e4. Play centers around the line 1.e4 c5 2.Nc3 Nc6 3.f4 and a Black doubled c-pawn complex.

Roman completes his opening repertoire recommendations for players of the White pieces by examining some old but potent variations of the Giuoco Piano and Scotch Gambit.