My rise to become World Champion 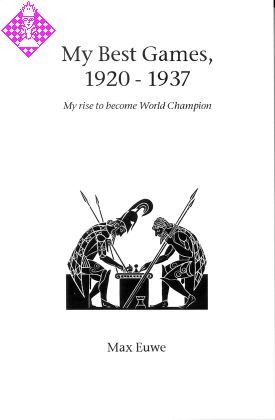 Descriptive Notation. Originally published as From My Games, 1920-1937, the fifth World Champion comments on his rise to the top. Euwe was a hero in his native country of the Netherlands, and his book explains why - Euwe was one of the very few who could stand up to the mighty Alekhine. Not only could Euwe hold his own, he scored some magnificent wins, such as his sparkling sacrifice of a knight against Alekhine at Zurich 1934 or the so called 'Pearl of Zandvoort' victory from the 1935 clash which elevated Euwe to the position of World Champion.

Dr Max Euwe is the only world champion to have come from Holland, where his triumph created something like nationwide chess fever. An apostle of order and logic, and a man possessed of a steely determination to win, Euwe seized the chess crown from the volatile Alekhine in 1935 - only to lose it back in the rematch of 1937. Nevertheless, Euwe held his own against such giants as Botvinnik, Fine, Fischer, Geller and Alekhine himself, in most cases giving as good as he got. Euwe went on to become president of FIDE, the World Chess Federation, and in this capacity he officiated at the celebrated 1972 championship between Fischer and Spassky. Euwe is the most active world champion on the Hardinge Simpole list, having written or contributed to no fewer than five published or forthcoming titles: Modern Chess Theory, Chess Treasury of the Air, the Tournament book of Groningen 1946, WCC 1937 and his own selection of best games.