The store will not work correctly in the case when cookies are disabled.
Artikelnummer
SRODZIUSWFB
Autor
Roman Dzindzichashvili 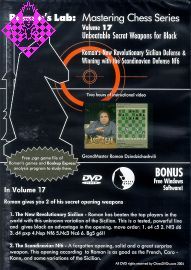 Roman gives you 2 of his secret opening weapons

2. The Scandinavian Nf6 - A forgotten opening, solid and a great surprise weapon. This opening according to Roman is as good as the French, Caro-Kann and some variations of the Sicilian.