The store will not work correctly in the case when cookies are disabled.
Artikelnummer
LODVOSOOP
Autor
Mark DworetskiArtur Jussupow 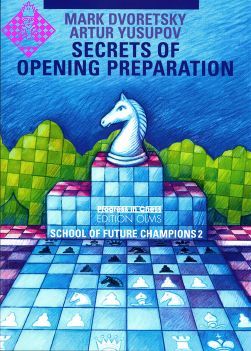 The world's top trainer, Mark Dvoretsky, and one of his best-known pupils, grandmaster Artur Yusupov, present a five-volume series based on courses given to talented young players throughout the world. The books contain contributions by other leading trainers and grandmasters, as well as games by pupils who have attended the courses.

The second volume explains the basic principles of the opening, discusses how to build an opening repertoire and produce opening novelties, and explores the con­nection between the opening and the later stages - the middlegame and the endgame.

030 Logic in the Opening (Mark Dvoretsky)

045 Surprises in the Opening (Artur Yusupov)

095 The Development of an Opening Repertoire (Mark Dvoretsky)

156 Preparing for a Game (Artur Yusupov)

224 The Connection of the Opening with the Endgame

234 In the Footsteps of one Game (Mark Dvoretsky)

255 Games by Pupils of the School (Artur Yusupov)