Shirov, My Best Games in the King's Indian 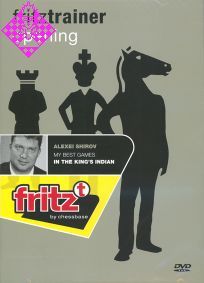 With this DVD on the King's Indian Defence, Alexei Shirov continues the successful and highly praised series about his best games. As in the preceding DVDs the Latvian super grandmaster succeeds in spoiling his public with analysis of a high quality and with exciting insights into his games, and he does so in his own reserved, pleasant and modest style. As is the case with many of his openings, Alexei Shirov also plays the King's Indian with both colours. The DVD concentrates on the main line of the Classical King's Indian with Nf3, Be2 and 0-0. In the games, and they are almost exclusively victories, his opponents are renowned experts in this opening, such as World Champion Kramnik and Boris Gelfand with White. The black side is represented, amongst others, by the legendary King's Indian specialist John Nunn, but also by Teimour Radjabov, who may not yet be a legend, but who is reckoned at the moment to be the greatest expert in the King's Indian. Video running time: over 5 hours.