The store will not work correctly in the case when cookies are disabled.
Artikelnummer
SCOMARSD
Autor
Andrew Martin

The ABC of the Sicilian Dragon 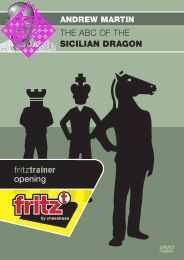 The Sicilian Dragon is one of the most extensively analysed openings in the entire realm of chess theory. That is because it is one of Black's best counterattacking options against 1 e4 and therefore very attractive. After 1 e4 c5 2 Nf3 d6 3 d4 cxd4 4 Nxd4 Nf6 5 Nc3 g6! Black develops aggressively and rapidly, has clear intentions on the half-open c file and the long diagonal. He retains options of levering open the queenside with the help of ...b7-b5 and ...a7-a5. Black keeps the inherently flexible Sicilian pawn-structure intact.

Yet.....can it really be sensible for the club player to wade in these dangerous waters? Will the game not reduce to a battle of memory, particularly in the Yugoslav attack? Not everyone has the talent of Kasparov, Carlsen, Topalov or Golubev. In the ABC of the Sicilian Dragon, Andrew Martin constructs a battle plan for the average player, which relies less on theory and more on understanding. He argues conclusively that this excellent opening CAN be used by every player and give fine results. Video running time: 4 h 10 min.

IM Andrew Martin is 50 years old and is the manager of Coaching for the English Chess Federation. This is his 14th DVD for ChessBase.