The store will not work correctly in the case when cookies are disabled.
Artikelnummer
LXKEETCMKK3
Autor
Raymond KeeneDavid Goodman 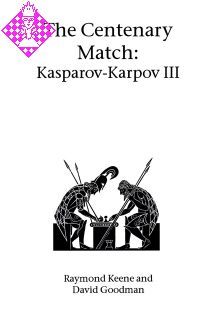 This book recounts the third of the five chapters in the half-decade long rivalry which erupted between Garry Kasparov and Anatoly Karpov. In the eyes of many this conflict symbolised the clash between the Brezhnev-inspired forces of reaction in the old USSR and the new Gorbachev/Yeltsin-driven imperatives of perestroika and glasnost which ultimately led to the collapse of the creaking Soviet empire, this match was held in London and Leningrad and was the first all-Soviet summit to be staged outside the USSR!

David Goodman is an International Master who resides in New York. During the Karpov-Kasparov clashes David worked as a correspondent in Moscow, London and Leningrad enjoying unrivalled access to behind-the-scenes information. He has, amongst many other publications, co-authored three books on Kasparov's matches against Karpov. Raymond Keene is a British Chess Champion, and the first British Player to achieve a FIDE (World Chess Federation) Grandmaster norm. He was awarded the OBE for services to chess in 1985. He is Chess Correspondent of The Times, The Sunday Times, The Spectator, and The International Herald Tribune. He was Chief Organiser of the London leg of the 1986 Championship Match.