The Greatest Ever Chess Tricks and Traps 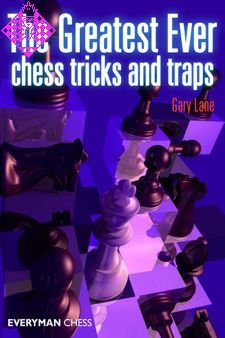 There is no easier way to win a game of chess than by luring your opponent into a devious trap. Similarly, there's nothing worse than being the one on the receiving end. Tricks, traps and swindles lie in wait everywhere, especially so in the opening phase of the game, and many battles can be won or saved simply through learning and mastering the most important ones.

In this instructive and fun book, Gary Lane looks back though chess history and at modern times to create a list of his own favourite tricks and traps. Selecting from hundreds of contenders, Lane examines a variety of factors in order to decide which ideas are most worthy of inclusion. Discover the stories behind the most cunning tricks and traps of all time; how you can utilize them to score easy wins; and how you can avoid being tricked yourself.

Gary Lane is an International Master and an experienced and successful player on the international tournament circuit. He qualified to compete at the World Cup in 2005 and is a former Commonwealth Champion. A prolific and popular chess writer, he is also a respected chess coach who has been involved in training some of England and Australia's top junior players.

This collection of opening tricks and traps is designed to be a guide to winning chess. I have tried to find ways to win quickly in the opening, usually within the first ten moves to make sure that the opponent has a chance to go wrong. These will be ideal for people who wish to improve by discovering the pitfalls and traps in various opening systems. The games include a wealth of practical tips, anec­dotes, and hints on how to improve.

I have made sure in the vast majority of games that good players have suffered losses in the lines given. This is because if experienced tournament campaigners fall victim to the tactics then just about anyone else will too. I also found it impor­tant to choose lines that, should the trap be spotted, one can carry on without fear of having a worse position. Indeed, I have occasionally added a game or two to help create a mini opening repertoire for those who wish to play and win.

Finally, I have added a section on Classic Attacks to make sure that improving players are aware of some common, winning ideas and how to apply them.

A Shortcut to Success

I have included a number of my favourite traps because they keep on winning games. The assumption is that the reader may not be familiar with some old fa­vourites - ones that are well known to someone who has played chess all his life, but certainly not to those new to the game. It is in effect a shortcut to success by acquiring a vast amount of knowledge about traps.

This became clear recently at a national junior event where my pupil won a piece in the opening. I consoled the opponent afterwards by pointing out that it came from the game Petrosian-Ree, Wijk aan Zee 1971. The teenager carefully replied: "I wasn't even born then and I am not sure if my dad was as well." This is the reason why it is worth knowing some key tricks and traps that masters take for granted.