The store will not work correctly in the case when cookies are disabled.
Artikelnummer
LXMUETHFICT
Autor
Karsten MüllerLuis Engel

The Human Factor in Chess - The Testbook 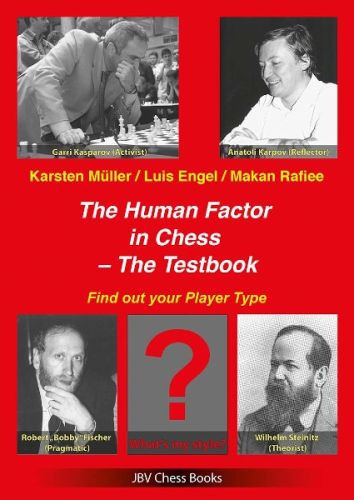 After the great success of the first book (The Human Factor in Chess) on the model of the four player types, this follow-up volume contains not only specific tasks and exercises but also general questions such as: Do you prefer to calculate concrete lines or do you make your decisions more intuitively? Do you have a good sense of harmony and coordination?

This approach is intended to enable the reader to assign himself to one of the player types and find out whether he belongs to the activists or rather to the pragmatists, theorists or reflectors. The result allows to draw conclusions in order to further expand the individual strengths or to develop a more universal playing style overall.

Because even if you usually win thanks to your strengths, it makes sense to work on your own weaknesses as well. Of course, if there is only one move in a position, you should be able to find it. Playstyles are especially important in positions where you have a great choice. However, they also play a role when you choose the type of position, which you should strive for based on your style.

Interestingly, a playstyle can also be imitated, which may even be the appropriate strategy against certain opponents. For example, certain characteristics stand out clearly in activists, and being able to adjust to them as an opponent is of course very valuable. A good example is Kramnik's win over activist Kasparov (at the London 2000 world championship match). Since Kramnik always managed to steer the game in the direction appropriate to his style, his big opponent never had the chance to demonstrate his own strengths in positions with attack and initiative.

While 'The Human Factor' was about a clear distinction of the four playing styles, this book aims to emphasize the universality of each player. After solving the tasks tailored to the four player types, it becomes clear how your own competencies are distributed. Accordingly, GM Vincent Keymer states in his foreword:

"Even if the further development of one's own player personality to a universal player who unites all player types may remain a utopia, it's still worth pursuing."