The store will not work correctly in the case when cookies are disabled.
Artikelnummer
LXREITIGOC
Autor
Fred Reinfeld

The Immortal Games of Capablanca 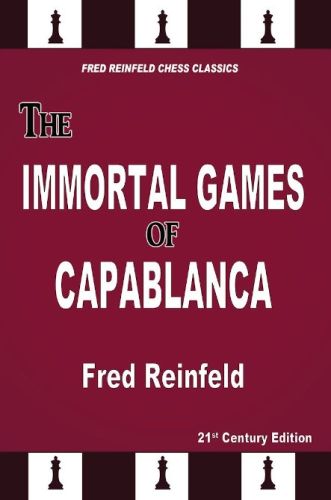 We are pleased to release another book in the Fred Reinfeld Chess Classics series. The Immortal Games of Capablanca was – and continues to be – one of Reinfeld’s most popular books. A detailed biography of the third world chess champion introduces the 113 games. They are presented chronologically, with clear and instructive annotations.

This 21st century edition has been revised and reformatted to meet the expectations of the modern chessplayer. This includes:

(a) The original English descriptive notation has been converted to modern figurine algebraic notation;

(b) Over 200(!) diagrams have added, along with more than a dozen archival photos; and

(c) The Index of Openings now has ECO codes.

Reinfeld’s annotations were also cross-checked by Stockfish 14, one of the most powerful engines available. When Stockfish had a different, meaningful evaluation from that of Reinfeld’s, the engine’s suggestion is indicated by “S14:” followed by the specific line.

As in our other “21st Century Editions,” and with the exception of the occasional supplement by Stockfish, Reinfeld’s original text has been preserved.

Follow the life and games of the brilliant Cuban world champion in Reinfelds’s timeless classic The Immortal Games of Capablanca.