The store will not work correctly in the case when cookies are disabled.
Artikelnummer
LXWELTLM
Autor
Steve GiddinsGerard Welling

The Lasker Method to Improve in Chess

A Manual for Modern-Day Club Players 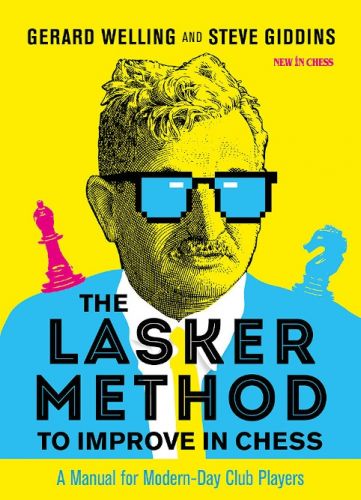 Many club players think that studying chess is all about cramming as much information in their brain as they can. Most textbooks support that notion by stressing the importance of always trying to find the objectively best move. As a result amateur players are spending way too much time worrying about subtleties that are really only relevant for grandmasters.

Emanuel Lasker, the second and longest reigning World Chess Champion (27 years!), understood that what a club player needs most of all is common sense: understanding a set of timeless principles. Amateurs shouldn’t waste energy on rote learning but just strive for a good grasp of the basic essentials of attack and defence, tactics, positional play and endgame play endgame play.

Chess instruction needs to be efficient because of the limited amount of time that amateur players have available. Superfluous knowledge is often a pitfall. Lasker himself, for that matter, also studied chess considerably less than his contemporary rivals.

Gerard Welling and Steve Giddins have created a complete but compact manual based on Lasker’s general approach to chess. It enables the average amateur player to adopt trustworthy openings, reach a sound middlegame and have a basic grasp of endgame technique. Welling and Giddins explain the principles with very carefully selected examples from players of varying levels, some of them from Lasker’s own games.

The Lasker Method to Improve in Chess is an efficient toolkit as well as an entertaining guide. After working with it, players will dramatically boost their skills - without carrying the excess baggage that many of their opponents will be struggling with.

Gerard Welling is an International Master and an experienced chess trainer from the Netherlands. He has contributed to NIC Yearbook and Kaissiber, the freethinker's magazine on chess openings. In 2019 Welling published, together with Steve Giddins, the highly successful chess opening guide Side-Stepping Mainline Theory.

Steve Giddins is a FIDE Master from England, and a highly experienced chess writer and journalist. He compiled and edited The New In Chess Book of Chess Improvement, the bestselling anthology of master classes from New In Chess magazine.

014 Chapter 2) Chess strategy and the principles of positional play

090 Chapter 8) An approach to the openings

128 Chapter 9) Games for study and analysis