The store will not work correctly in the case when cookies are disabled.
Artikelnummer
LMMUETMTOMT
Autor
Karsten MüllerRaymund Stolze

The Magic Tactics of Mikhail Tal

Learn from the Legend
Eigenschaften
Vergriffen 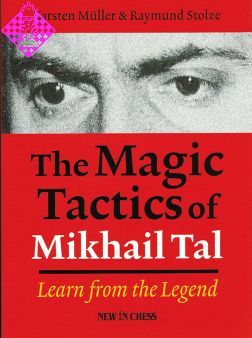 "You must lead your opponent into a deep, dark forest, where 2 + 2 = 5 and where the path back out is only broad enough for one of you." Mikhail Tal

Mikhail Tal was one of the greatest geniuses in chess history. Feared and admired for his dazzling attacks, the ‘Magician from Riga’ took the chess world by storm. In 1960, at the age of twenty-three, he wrested the world title from Mikhail Botvinnik to become the youngest World Champion ever.

In this book Karsten Müller and Raymund Stolze have created an instructional guide by investigating and explaining the secrets of Tal’s breathtaking tactics. Additionally, they present one hundred exercises selected from his games that will teach amateurs how to distinguish between correct and incorrect combinations, and how to defend against them.

A special feature are the contributions from legendary grandmasters such as Spassky, Yusupuv and Kramnik, who share their personal impressions and describe their games with the 8th World Champion.

The result is both an intimate portrait of one of the all-time greats of chess and an instructive guide for lovers of Tal’s legendary combinational style.

240 Chapter IV - The Correct Way to Defend against the Magician