The store will not work correctly in the case when cookies are disabled.
Artikelnummer
SCOMARTWVA
Autor
Andrew Martin 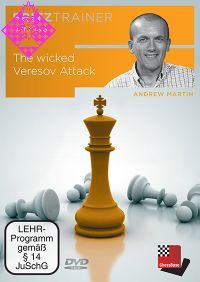 The Veresov ( 1 d4 Nf6 2 Nc3 d5 3 Bg5) is little-played and understood when we compare it to other queen’s pawn openings, like the Trompowsky, Torre Attack and London system. As such it can be a very dangerous weapon in the right hands. Very few club or amateur players will be properly prepared to play against it. The Veresov is an attacking opening, based on quick minor-piece development followed by effective pawn levers to open the game. Many strong grandmasters have used the Veresov as a surprise weapon, including Spassky, Tal, Bronstein,Alburt and Gufeld. Modern exponents include Miladinovic and Jonny Hector,with whom the Veresov is a special favourite.

On this all-new ChessBase DVD Andrew Martin introduces the opening and discusses how the main themes work. After that comes a selection of repertoire choices. Finally,there is a quiz, where you may test yourself about what you have learned. This DVD is an ideal introduction to this opening for players below 2000 or busy players who would like to play aggressive chess, but do not have time to learn the main lines. The Veresov is worth studying and playing!

Andrew Martin (born 18th May 1957 in West Ham, London) is an English chess player with the title of international master. Martin has won various national and international tournaments. He has been playing for years in the Four Nations Chess League, at present (July 2009) for Wood Green Hilsmark Kingfisher, previously for the Camberley Chess Club. Martin received his title as international master in 1984. He earned his first grandmaster norm in the British Championship of 1997 in Brighton. Martin was a commentator on the chess world championship between Kasparov and Kramnik in 2000. Martin is known as a professional chess teacher and head trainer of the English youth Team.