The store will not work correctly in the case when cookies are disabled.
Artikelnummer
LXGOLTWCC1954
Autor
Harry Golombek 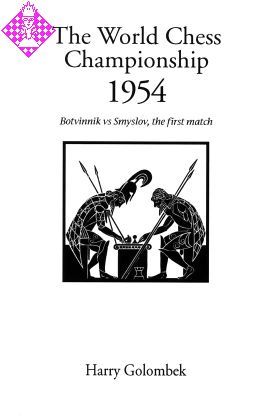 Harry Golombek OBE was perhaps the king of chess writers. Chess correspondent for The London Times and The Observer, he possessed an unrivalled gift for transforming a chess game into an heroic saga with himself as the bard, singing the exploits of his chosen heroes of the mind. Several times British Champion, Golombek also played top board for Egland in the Olympiad and represented the British Chess Federation in the FIDE World Championship cycle. He was fluent in Russian and personally attended the World Chess Championships of 1954,1957 and 1958 as a judge. (A companion volume, also published by Hardinge Simpole, covers the matches of 1957 and 1958.)

This book contains the account and eye witness analysis by Golombek of the first of the three titanic world title clashes between Botvtnnik and Smyslov, unquestionably the dominant players of the 1950s. (A companion volume, also published by Hardinge Simpole, covers the second and third of these matches.) Botvinnik was the iron man of Soviet chess while Smyslov, by crushing the world's greatest players at the Candidates Tournaments of 1953 and 1956, had proved himself the most worthy challenger. These games are bloodthirsty classics between two supreme exemplars of the Soviet school of chess, annotated by the man on the spot who had unrivalled access both to the players and to the very best of Soviet analysis.