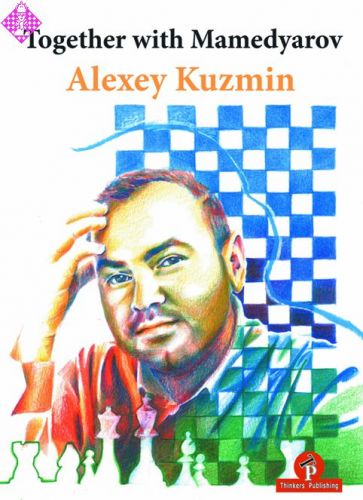 The book that you are holding in your hands is a continuation of the famous Kuzmin series. The two prior books concerning the chess creativity of Alexander Morozevich and participants in the Candidates tournaments was written for rather experienced players. That last book on the Candidates recently won the FIDE Chess Book Award of the Year 2018.

This book is different in that “Together With Mamdeyarov” has been written primarily for chess players with an Elo ranging 1400-2100. While working on the book I followed two objectives. First to help the players’ improvement and secondly to closer acquaint the readers with the creativity of one of the brightest contemporary grandmasters. If I were to characterize Mamedyarov’s play in one word I would use the adjective “powerful” and if I were to use two words, then perhaps “power chess”. Namely this energy and power are the dominants of his creativity with his opening preparation being only a supplementing factor.

“Together With Mamedyarov” is not a collection of his selected games but it is primarily a study-book. It contains test positions taken from games of the famous Azeri grandmaster with detailed comments on the solutions to the tasks. In this book the solutions have been placed right after a diagram with a test except for the six positions given as a warm-up in the beginning of the chapter one. For those of you who work without the assistance of a coach would recommend that you cover the answer with a sheet of paper to avoid spoiling the benefit of solving the problem.

The tests’ tasks are intended for training:

The solutions have been given points ranging from 1 up to 7. After calculating their total amount, you can determine your approximate level by the author’s ranking scale. But do not forget that this ranking scale is subjective. After totaling your result, you should have an idea about what type of tasks are the most challenging for you. Th is will help you direct your time and eff orts on the areas where you need further improvement. Th e tests given in the first and the second chapters differ by the level of complexity. The tests in chapter one corresponds to an Elo rating of 1400-1900 while chapter two is aimed at players rated 1700-2100. When you solve the tests from Mamedyarov’s games try to reproduce the thought process of one of the most creative and bright grandmasters of today. Imagine yourself in his place during a game, look at the chessboard through his eyes and think about the positions together with Mamedyarov.

This book is dedicated to all young chess players aspiring to improve but i also hope that it will be interesting for admirers of the Azeri “number one” chess player’s creativity and his fans. Further we hope this book will be useful for coaches in their work.