The store will not work correctly in the case when cookies are disabled.
Artikelnummer
LXTANVM
Autor
Robert B. Tanner 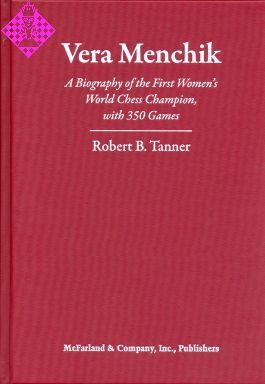 Not only was Vera Menchik the first woman in the history of chess to compete on an equal basis with the top male players, she absolutely dominated women’s chess during the last 17 years of her life. Hers was a fascinating career as an independent professional in an era where this was rare for women in any endeavor.

In this book her games are brought to life utilizing her own annotations, as well as the notes of her contemporaries including Capablanca, Alekhine, Fine and others. All of her known games, as well as samples of her writings on the subject of chess are included. Beyond the technical aspect of her games, a brief biography and eulogies by her friends and colleagues reveal her life as a player and as a human being. Included are her comparisons of Russia where she was born and England where she resided as an adult, her philosophy of life, as well as her perspectives on chess in England and during World War II. Above all, a view is provided of the life of the chess professional during the golden age of Lasker, Capablanca, Alekhine, and Euwe.