The store will not work correctly in the case when cookies are disabled.
Artikelnummer
LEMINAPGTRE
Autor
Nikolai Minew

A Practical Guide to Rook Endgames 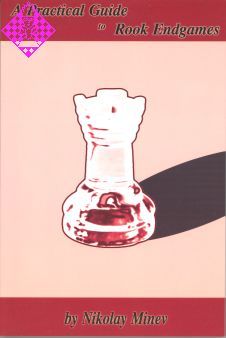 It is always a pleasure whenever I'm allowed to write a foreword to one of IM Nikolay Minev's books. It brings me particular joy to introduce English readers to this remarkable work. As I've written in previous forewords, Nikolay and his wife, Elena, immigrated to America in the mid-80s and fortune smiled upon me when the couple stopped in Seattle on their way to Los Angeles, their intended destination. Fate further intervened when Nikolay and I became neighbors living in the same downtown Seattle condominium building. In no time Nikolay and I had established our schedule; Friday evenings at 6PM or 7PM became our time together. Our meeting time depended upon when ESPN Sports network featured its Friday Night Fights program. Pugilism is our favored viewing sport and after a few good contests, where a fighter is sent to a different time zone, a perfect mood for Nikolay and I to study chess is created.

Normally our training sessions begin with an overview of the best games of the week or month as we carefully replay them together. Nikolay is a tactical deviant and he is always on the lookout for unusual tactical patterns with which he likes to stump me to find the surprising winning shot. I had better be fast as Nikolay expects a sharp eye and a quick hand. After enjoying ourselves for a few hours we then settle down to a bout of story telling. Nikolay is a master story teller and I'm a captive audience. After fifteen years of regular meetings, Nikolay still shares original stories that are recalled as a result of my excessive prompting. Certain recollections will cause Nikolay to scurry to one of his many bookcases and re­move a cherished item or two. Invariably these works are either in Russian or Bulgarian and it is a secret annoyance that I too can't share his pleasure as he sets up the positions they contain, sharing the knowledge therein.

Surprisingly, one tome becomes a constant guest in our discussions and it is the very work that you, dear reader, are now holding. As most chess players know, Rook-and-pawn Endgames represent approximately half of all endings reached in master games. Therefore, it is absolutely vital that chess players wishing to improve their skill must thoroughly familiarize themselves with this critical part of endgame study. When we play through a modern game and reach a specific rook endgame, Nikolay might blurt out "Draw!" or "Win!" To which I might agree, or seriously doubt. "Let us be sure," Nikolay will say and off he goes to retrieve the oracle. He has used the Bulgarian version of his work so often that the position is discovered almost at once. Sometimes the position at hand is slightly different than the one in the book and it is precisely these positions Nikolay likes best. Nikolay has developed his own methods of study and what he suggests is that after fully understanding a specific position, the student should change the set-up. Would the position still be a draw if the pawn were shifted one file or rank? Would the position still be won if the defender had an extra tempo? It is this curiosity and the desire to know with a certainty that makes Nikolay such an enjoyable training partner. He is only satisfied when he is sure that he has mas­tered the position at hand. These days, Nikolay's eyesight hasn't been so good and he has taken to pushing the oracle in my direction and asked me to follow the analysis. While the chess moves are clear, Bulgarian remains a mystery to me. This had caused me to con­stantly complain, "Nikolay, please, you've got to get me the English version!" Fortunately, for both Nikolay and myself, Hanon Russell of Russell Enterprises is a mutual friend and when I proposed this project to him, he was quite enthusi­astic. Nikolay less so. Working slowly on his translation, several years later the English version of the book was completed. Its publication, needless to say comes as a great relief to me and I'm very proud of the work that Nikolay and Hanon have done as now I can enjoy all the commentary that eluded me for years.

The original Bulgarian work had been translated into Russian and that edition sold out in huge quantities. Virtually a whole generation of Soviet players have intently studied this work which leads me to tell my own remarkable story: Fol­lowing the September 2002 Russia versus the Rest of the World event in Mos­cow, I played the role of trainer/co-captain for the Rest of the World Team. After great adventure, the Rest of the World Team won despite being vastly out-rated. After the match, Garry Kasparov invited me to visit his Moscow flat where we landed in front of a chess board. Being chess players one should always be ready for an impromptu blitz session and we were soon bashing our moves out. In one particular game I had been pressing an initiative for some time when suddenly Garry Kimovich called out, "Draw!" I begged to differ; the edge was mine. Garry disappeared for a few moments and came back with a book on rook endings. Within seconds he had found the exact position on our board, showed the analy­sis and exclaimed, "Minev!" Well, what to say? I was all prepared to challenge the highest ranked player in history to continue the game, but I wasn't prepared to challenge Minev. We re-set the pieces for the next game.

Dear readers, this is a work that should be enjoyed and treasured. Carefully ex­amine the chosen examples and challenge yourself to understand them fully. Your efforts won't make you a Garry Kasparov but you will be following in the foot­steps of many of the world's masters.

005 About this book and how to use it

008 Chapter One: Strategy and Tactics of Rook-and-pawn Endgames

009 Important Features of the Pieces

046 6. Transition to a Different Type of Endgame

Rook and Pawn versus Rook

Rook and Two Pawns versus Rook

087 1. Rook and Doubled Pawns versus Rook

Rook-and-pawn Endgames with an Extra Pawn

109 2. Rook and Three Pawns versus Rook and Two Pawns

112 3. Rook and Four Pawns versus Rook and Three Pawns