The store will not work correctly in the case when cookies are disabled.
Artikelnummer
LMBEIBTBS
Autor
Valeri Beim

Back to Basics: Strategy 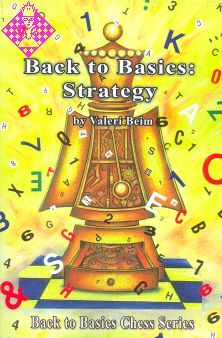 While there are many books about how to improve your chess tactics, instructive books about chess strategy, particularly for players of less than master strength, are few and far between. In the latest entry in the widely acclaimed Back to Basics Chess Series , international grandmaster and popular author Valeri Beim explains the basics of strategic concepts in chess.

This book has been written for the great majority of chessplayers rated below master strength. Clear, concise explanations and examples, discussions of strategic objectives and of the formation of strategic plans are all designed to aid the aspiring chessplayer to better understand and implement chess strategy.

Playing chess is interesting - but playing and winning is even more interesting!

Which paths lead to victory in a game of chess?

Three such paths are known. The first is a direct attack on the king, with the aim either to mate, or to force the opponent, in defending that attack, to suffer serious material losses. The second is also to obtain enough of a material advantage for an easy win; but this time it is achieved by means of a tactical blow (we will not be examining the case of a horrible blunder by our opponent, since the more playing experience one has, the less often this happens. Besides, training oneself to await stupid mistakes from one's opponent is wrong on principle, and very harmful to one striving for selfrealization!).

And the third and final way is the technical, and consists of slowly nursing relatively small and varied material or positional advantages to victory. This path may be the very hardest, and learning to master technique will cost the studious player more time than learning the other playing habits.

And although all the fundamental methods of play I just listed usually require that a player have different levels of knowledge and different levels of preparation, each of them shares one important general characteristic. And that is: in order to win by objectively proper means - that is, not as a consequence of your opponent's terrible blunder - it is necessary that objective reasons for this exist in the position.

Such reasons, always contained in the position, are a superiority for one side in some of the components which make up a chess position. Such superiorities are usually called advantages. There are various kinds of advantages, sometimes in material, other times in the most diverse elements of the position. Advantages of the latter type are commonly referred to as positional advantages.

In the main, this book will be devoted to questions of classifying positional advantages and the various operations that can be performed with them.

009 Introduction to Our Theme

068 The Center and the Wings