The store will not work correctly in the case when cookies are disabled.
Artikelnummer
LEROZTCEITE
Autor
Eduardas Rozentalis

The Correct Exchange in the Endgame 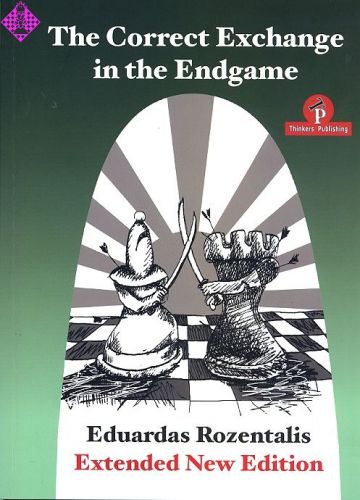 In between 1985 until now, he won 45 international tournaments, played for many European different clubteams and in 10 Chess Olympiads for Lithuania.

The endgame is the most complicated area of chess. In his book GM Rozentalis looks at some of the most important questions: the connection between the opening and the endgame, when to exchange, bishops against knights, be patient or just simplifiy.

Along the way he also gives a word of advice when to calculate as exactly as possible and when to rely on your acquired knowledge.

This is his second extended edition. The first edition was nominated "FIDE Chess Book" of 2016.

015 CHAPTER 1. EVALUATION OF THE EXCHANGE

015 Simplification in a better position

019 Simplification in an inferior position

021 Exchange of the most active piece of the opponent

041 CHAPTER 2. CALCULATION OF THE EXCHANGE

041 Forced simplification of the position

042 Exchange as part of a forced variation

044 Exchange as apart of complications in an inferior position

064 Which piece to exchange?