The store will not work correctly in the case when cookies are disabled.
Artikelnummer
SCOFTATGD
Autor
Ljubomir Ftácnik 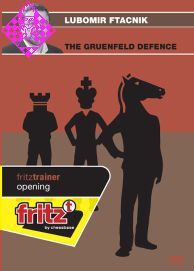 TheGruenfeld Defence (1.d4 Nf6 2.c4 g6 3.Nc3 d5) enjoys a special star status in the family of Indian openings. It involves a daring, active concept: fighting for control of the centre with an early d7-d5 thrust supported only by pieces. The ensuing lines and positions promise more active play than most openings. Black has to know the critical ideas and most promising plans as most lines are pretty sharp and concrete. Many top players have tried to “refute” the Gruenfeld, honourably failed and ended up defending its charms with remarkable success. The opening is fully covered in 50 sectionscovering all lines of any importance. Two bonus sections discuss typical endgames - Black usually has equal or superior chances in Gruenfeld endings - as well as characteristic middlegame pawn structures. The DVD presents a repertoire - for each variation the author shows the best or most promising line for an amateur or tournament player. The games database gives the chance tounderstand more than 8000 Gruenfeld games played by the best players - 1300 of them deeply annotated. The majority of the notes are by Krasenkow and Ftacnik who have dilligently covered the opening in ChessBase Magazine for two decades. Video running time: 7 hours 21 min.

Lubomir Ftacnik is a Slovak grandmaster with decades of experience in international chess. As a younger member of a strong chess generation in the former Czechoslovakia he helped to win silver at the Luzern Chess Olympiad in 1982. Most of his fellow grandmasters have been keen defenders of Gruenfeld Defence and the author has come up with his share of ideas in various lines. The work on the Gruenfeld DVD is the fruit of 30 years experience with this active and rewarding opening.