Winning with the Grand Prix Attack 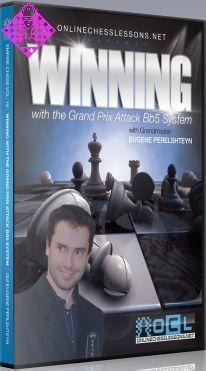 The Grand Prix Attack Bb5 System is both an agressive and positional chess opening. White prepares an attack on the kingside with an early f4, while maintaining the threat of doubling black’s pawns with Bxc6 – applying similar positional concepts as found in the Nimzo-Indian Defense. If you are a 1. e4 player who has trouble against the main lines of the Sicilian Defense, and you don’t want to dedicate dozens of hours of valuable chess studying time to memorizing all of the variations so you can achieve an ending at +.43 – why not try a different system to get better results with less effort? This setup is perfect for the beginner and intermediate chess player because it is driven by understanding of positional concepts and thematic attacking plans – NOT memorization of move orders! In this 2 hour chess DVD, Grandmaster Eugene Perelshteyn presents his deep knowledge and experience of how to crush the Sicilian Defense with the Grand Prix Attack Bb5 System.

GM Perelshteyn and his former chess coach GM Roman Dzindzichasvili have used the Grand Prix Attack Bb5 System with great success over their distinguished careers, scoring a number of impressive victories with the dangerous sideline system for white against the Sicilian Defense. Grandmaster Perelshteyn is a renown chess trainer with over a decade of teaching experience, and his profound understanding of how to clearly present advanced chess concepts really shines through in this DVD. The talented GM reviews all of the main lines and sidelines in the Grand Prix Attack Bb5 System, guaranteeing his viewers a high level of success with this incredibly effective opening weapon against the Sicilian Defense.