Easy Guide to the Classical Sicilian 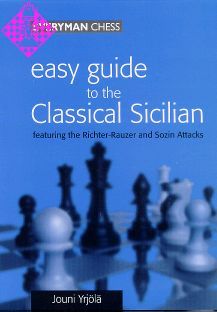 The Classical Sicilian is one of the most popular openings among top-class grandmasters as Black develops in straightforward and logical fashion. Whether White tries an immediate attack or chooses a quieter approach, Black retains the famed Sicilian counter-punch. The Classical is surprisingly neglected in chess literature; Grandmaster Yrjölä finally reveals both the theory and concepts behind this well-respected opening, making it accessible to players of all levels.

Finnish grandmaster Jouni Yrjölä has played the Classical Sicilian with considerable success thoughout his career. He has won the Finnish Championship twice, and regards Sochi 1984 where he shared third place with the legendary Mikhail Tal, as his best tournament result. He was awarded his grandmaster title in 1990.

042 4. The Sozin and Velimirovic Attacks