The store will not work correctly in the case when cookies are disabled.
Artikelnummer
SCOERNTFOS
Autor
Sipke Ernst 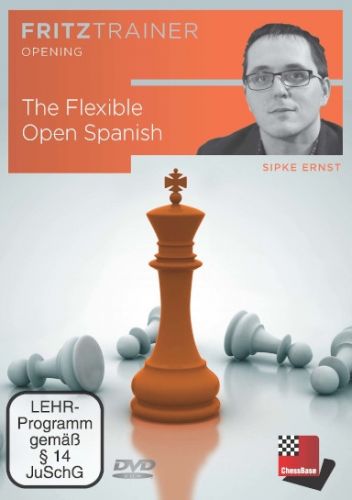 The Open Spanish is considered to be one of the soundest systems in modern opening theory. It remains a popular choice among superstars such as Mamediyarov, Caruana, So and Giri and was used in World Championship matches by Korchnoi and Anand. In this opening Black opts for active piece play and is not afraid to fight for the initiative from an early stage. One of the many good features of this opening is that Black is often the side which controls the pace of the game. Black can go for long forced variations that lead to sharp endgames or choose a slower game with more pieces on the board. Therefore, the Open Spanish is not only an excellent weapon against stronger players, but also gives plenty of scope for the outplaying of “lesser rated’’ opponents.

This DVD offers a full repertoire for Black against 1.e4 and gives you a great arsenal of ideas against all the topical lines.

GM Sipke Ernst is a Grandmaster and FIDE Trainer who has been a member of the Dutch National Team. His peak Elo is 2606.