The store will not work correctly in the case when cookies are disabled.
Artikelnummer
LOPALDPA
Autor
Richard Palliser 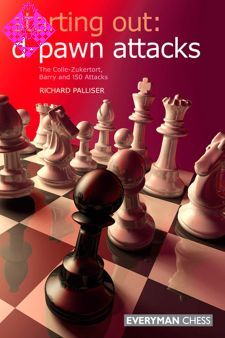 Are you looking to attack with 1 d4? Then look no further...

In this book Richard Palliser provides in-depth coverage of three of the most dangerous attacking set-ups available to White: the Colle-Zukertort, the Barry, and the 150 attacks. In recent years these three opening weapons have considerably gained in popularity, especially at club level, and it's easy to see why. They are fun to learn, and easy to play; they take Black away from the comfort zone of established theory; and they can all lead to devastating mating attacks against the black king. What more can you ask from an opening? Whether you are playing the White or Black side, this book tells all you need to know. The Everyman Chess Starting Out series has firmly established itself as the leading guide to studying openings for up-and-coming players. These books are distinguished by their easy-to-read layout, the lucid explanations of the fundamentals, and the abundance of notes, tips and warnings to help the reader absorb vital ideas. Starting Out opening books are ideal for enthusiastic chess players who have little experience of the openings in question and who wish to appreciate the essential principles behind them.

Richard Palliser is an International Master with numerous tournament successes to his name, and in 2006 he became Joint British Rapidplay Champion. He has already established a reputation as a skilled and prolific chess writer. Previous works for Everyman Chess include Starting Out: The Colle and The Complete Chess Workout

This work covers three attacking and fairly non-theoretical systems for White, namely the Colle-Zukertort, the Barry Attack and the 150 Attack. Put together they create the backbone of quite a dangerous repertoire for White, especially at club level.

Nowadays this system is usually referred to as the Colle-Zukertort; the second part of that name stemming from one of the leading players of the 19th Century, Johannes Zukertort. One can still play the opening in the same manner as Zukertort himself by playing a quick c4, but modern grandmaster exponents of the Colle-Zukertort, especially Artur Yusupov and Susan Polgar, often prefer to launch a kingside attack. Such a strategy is certainly justified by the manner in which both white bishops point at the black kingside, and Black underestimates such an attack at his peril.

The Colle-Zukertort can be employed against both 1 d4 d5 and a Queen's Indian-type approach from Black (1 d4 Nf6 2 Nf3 e6 3 e3 b6), as we will see, but it is inef­fectual against the King's Indian, Quite simply Black's g6-pawn blunts the bishop on d3, while his g7-bishop fights for control of the long a1-h8 diagonal. Those who like to attack but don't want to play an early c4 need not, however, despair. By meeting 1 d4 Nf6 2 Nf3 g6 with 3 Nc3 d5 4 Bf4 White introduces the Barry Attack.

The Barry player can attack directly with 5 Qd2 and Bh6, but no less effective is the seemingly more quiet set-up with 4...Bg7 5 e3 0-0 6 Be2, since White is now ready to advance with 7 Ne5 and 8 h4. The Barry has played a prominent role in the English Grandmaster Mark Hebden's repertoire for twenty years now, and so, just like with the Colle-Zukertort, it is possible for even grandmasters to employ it as more than just a dangerous surprise weapon.

The 150 Attack The Barry Attack is not a stand-alone weapon, since White must be prepared for Black to meet 1 d4 Nf6 2 Nf3 g6 3 Nc3 with 3...Bg7 4 e4 d6, transposing to the Pirc Defence. Here White has a few options, but I've chosen to focus solely on an ag­gressive line beloved by many leading Barry exponents, namely the 150 Attack. This sees White develop with 5 Be3 and Qd2, and if Black is careless then a rapid kingside attack after Bh6 may well blow him away.

Do These Three Attacks Promise an Objective Advantage?

The Colle-Zukertort, Barry and 150 Attacks do not promise White a theoretical advantage against a well-prepared and experienced opponent, but that is no rea­son for not playing them. After all, one can follow up 1 d4 with 2 c4 and still fail to gain an objective advantage against most of Black's main defences! Practically speaking, though, our three attacks will often supply some advantage. Black play­ers may know what they are, but they have usually spent much less time studying them than their main defences (lines against c4), and throughout this work we will see some quite strong players making a number of early inaccuracies. More­over, White's play is usually pretty thematic in all three systems and a good un­derstanding of the key ideas and plans for both sides can take one far.

The 'Starting Out' format is ideal for learning the key ideas behind the Colle-Zukertort, Barry and 150 Attacks. I've aimed to make good use of the complete games at the end of each section, as well as the typical notes, tips and warnings, to highlight the key motifs in each system. Indeed, just by initially playing through the main line of each chapter sub-section, as well as the complete games, the club player should be able to begin using these openings with confidence. I've as­sumed that the reader is fairly unfamiliar with all of them, but existing Colle-Zukertort, Barry and 150 players may still find much of interest. As the Colle-Zukertort can be played against both I...d5 and l...Nf6 2 Nf3 e6 I've given it a fair amount of coverage, while the Barry has seen both sides develop some new ap­proaches over the past decade or so.

Is This A Complete Repertoire For White?

The three attacks featured here will occur in a clear majority of the reader's games with 1 d4, but this work does not represent a complete repertoire. I have extended the boundaries a little at times to cover some extra lines, but there are three key areas which have not been included, since they cannot be met effectively by Colle-Zukertort or Barry-like play:

i. Black's second and third move deviations in the popular sequence 1 d4 d5 2 Nf3 Nf6 3 e3 e6, which can be quite effective should White proceed in Colle-Zukertort style. White can though respond in a more challenging manner, such as with an early c4, as I showed in some detail in Starting Out: The Colle.

ii. Against the Dutch Defence there's no magic formula. One can play the main lines with 2 g3, as Hebden does, fight with the uncompromising 2 Bg5 or aim for a positional edge with 2 Nc3.

These three areas all deserve attention no matter what strength the reader is, but I must stress that one will more often than not get either a Colle-Zukertort or the chance to offer the Barry, because the Queen's Gambit Declined, the Nimzo/Queen's Indian and especially the King's Indian are rather popular at club level.

The Colle-Zukertort, Barry and 150 Attacks have brought me a number of points over the years. I hope that you too will enjoy attacking with them and do so with some success!

111 Other Defences to the Colle-Zukertort