The store will not work correctly in the case when cookies are disabled.
Artikelnummer
LXLINEL
Autor
Isaak LinderWladimir Linder 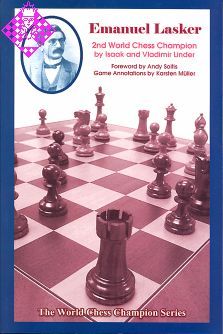 Emanuel Lasker was a great chess fighter, thinker and researcher. He was possessed of gigantic playing strength, retaining the title of World's Number One Chessplayer for 27 (!) years. Even after losing his crown, he kept his ability for a long time, as shown by his victories and prize-winning finishes in immensely powerful international tournaments when he was 54 (Moravska-Ostrava 1923), 55 (New York 1924), 56 (Moscow 1925), and even at 66 (Moscow 1935)!

One of the chief postulates of the second world champion was the battle of honor. "On the chessboard, lies and dishonesty-have no place." These words of Lasker could serve, even today, as an example to every young chessplayer of how to relate to the Royal Game.

Lasker's games of chess, like his entire chess legacy, will live forever!

Join Russian chess historians Isaak and Vladimir Linder as they take you on a journey exploring the life and games of the great world champion Emanuel Lasker.

Isaak Linder is regarded as one of the pre-eminent chess historians of the modern era. He is the author of many books, including the widely acclaimed books in the World Chess Champion Series.

Vladimir Linder is one of the best known sport journalists in Russia. He is also the co-author, with his father Isaak Linder, of many books, including the widely acclaimed books in the World Chess Champion Scries.

009 A Word About the Authors by Yuri Averbakh

252 Significant Dates in the Life and Work of Emanuel Lasker