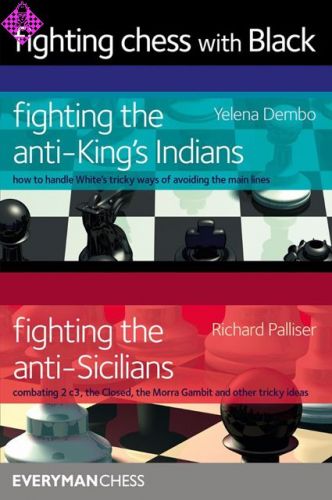 Two great books for players who play the Sicilian Defence and King’s Indian Defence in one volume.

Fighting the anti-Sicilians by Richard Palliser

'I love playing the King's Indian, but no-one ever allows me to reach my favourite opening!' Does this sound like an all too familiar complaint?

You will reach your favourite opening in barely half the games you play against 1 d4, and that's why this book is the ideal guide to play against those annoying White systems designed to avoid the main lines: the Trompowsky; the London System; the Torre Attack; the Barry Attack; the Colle System; the Veresov; the Blackmar-Diemer Gambit - the list goes on and on!

Yelena Dembo, who as a hardened King's Indian and Grünfeld player has considerable experience facing these irritating openings, deals with them in no uncertain terms, in each case offering Black a no-nonsense solution that enables you to face the future with confidence

The Sicilian Defence is by far Black's most popular answer to 1 e4 at all levels of chess. The reason for this is easy to understand: from the very first move Black unbalances the position and can play for a win without needing to take unjustified risks. This is particularly the case with the Open Sicilian, where Black can take comfort from the knowledge that his superior pawn structure ensures control of the centre and excellent long-term chances.

Richard Palliser, a lifelong Sicilian devotee, decides it's time for Black players to finally fight back! Drawing upon his vast experience and understanding of Anti-Sicilians, Palliser creates a dynamic and practical repertoire for Sicilian players to use against these possibilities. In many instances he offers more than one solution for Black - ambitious or solid - and he pays special attention to tricky move orders, weapons that present-day players are likely to use.

131 7 A Kingside Fianchetto vs. the King's Indian

153 8 A Kingside Fianchetto vs. the Grünfeld