For Friends and Colleagues 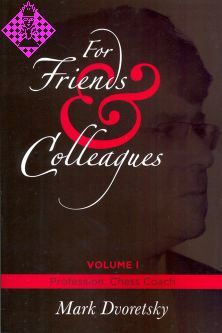 Mark Dvoretsky has long been considered one of the premier chess coaches and trainers in the world. He is renowned for taking talented masters and forging them into world-class grandmasters and champions.

His literary achievements are also quite distinguished. For example, Dvoretsky’s Endgame Manual , soon to be released in a fourth edition, established itself as the sine qua non of endgame theory from the moment it appeared over a decade ago.

This accomplished chess instructor and author now shares his story in a ground-breaking two-volume set. You are invited to share his journey from his childhood and maturing into a strong master, to his participation in the powerful Soviet championships and then, his transition to full-time chess coach.

Along the way, Dvoretsky pulls no punches with his commentary and insights about the all-encompassing Soviet chess machine, top-flight grandmasters, and his trials and tribulations as he helped develop “average” masters into world-class players.

113 Yusupov and Dolmatov – the Way Up

157 The Most Talented Student