The store will not work correctly in the case when cookies are disabled.
Artikelnummer
LGZEIHGSATSO
Autor
Rob van ZeijstRichard Bozulich

K82 - The Road Map to Shodan, Volume One 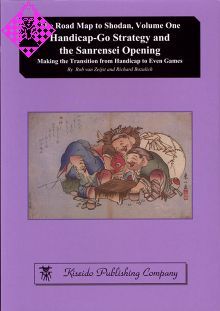 Go is played on a board with a square grid of361 playing points: For the beginner, such a large playing field can be overwhelming and it is understandable that he or she might feel lost. For this reason, many professionals recommended that beginners play their first games on a 9x9 board. With only 81 playing points to consider, the game becomes conceptually manageable and the beginner can start learning the most elementary tactics and how territory is formed.

After a few games on a small board, the beginner will graduate to playing games on a 13x13 board and eventually to games on the standard 19x19 board. Again the novice player is faced with a conceptual problem. He may be instructed to play his first moves in the corners, but with such a vast number of playing points to consider, he has no idea how to proceed strategically.

By starting with nine ofhis stones placed on the star points, the beginner occupies the main strategie points. However, the game is not trivial. White still has a lot of room to maneuver. It takes many games and a lot of study for the beginner to be able to defeat a dan-level player at a nine-stone handicap.

The lessons leamed in playing with a nine-stone handicap are more than tactical. A lot of strategic principles are learned, such as the importance of separating and confining your opponent's stones and the value ofbuilding thick walls that project influence into the center and along the side. As the novice improves and the handicap is reduced, these principles can be put to use and other principles will be learned. In this process, the most important thing that a beginner has learned is how to use their handicap stones to build thick positions, then tuming the influence ofthese positions into territory.

By studying the Sanrensei Opening next, where the black player starts out by occupying the three star points on one side of the board, the novice can then use the principIes and sequences learned in handicap games. Moreover, the basic strategy of playing for outside influence used in handicap games is the same strategy a player uses in the Sanrensei Opening. This is the natural way to make the transition from handicap to even games and we recommend that inexperienced players adopt it, at least initially, in all of their games. By starting to study the opening as outlined in this book, the kyu-level player can lay a solid foundation for the study of other opening systems and opening theory in general.