How to play the Sicilian Defence!

Improve your chess with Elisabeth Pähtz 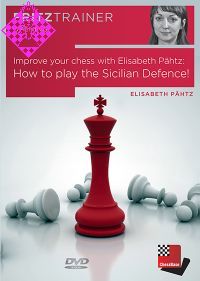 Interactive, communicative and efficient. These are the distinguishing features of the recently developed training format by ChessBase. You are transformed from a spectator into a participant! Answer every one of your trainer’s questions by entering a move. It doesn’t matter whether you score a bullseye or not: your trainer will provide you with feedback. Like that, you assimilate variations and motifs with every move! The Sicilian Defense is an old but ne vertheless very modern opening. T he continuous stream of new ideas in the Sicilian mak es 1..c5 the most popular answer to 1.e4. On this DVD I do giv e an introduction to the most important Sicilian s ystems. However, the focus lies not on memorizing v ariations. Instead, I present some of m y own games to show typical plans and s trategies and to indicate typical and important tactical motifs, which can be used in v arious systems. The DVD is divided int o three parts. In the firs t part I annota te six illustrative games from my own practice, which provide a good o verview about the v arious possibilities to play and to attack with both c olours. The second part is based upon the first and contains a number of e xercises. The third part finally r eveals a number of typical opening traps for those who lik e a little bit of theory . Knowing these traps helps you to avoid catastrophes in the Sicilian and might allo w you to score an occasional quick win yourself.