The store will not work correctly in the case when cookies are disabled.
Artikelnummer
LXURCJF
Autor
Olimpiu G. Urcan 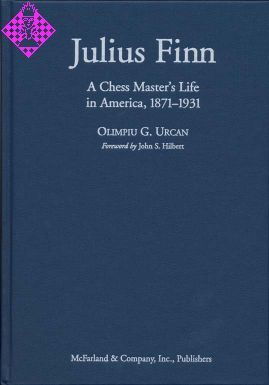 Julius Finn was born in Russian Poland, and came to New York in 1887 at the age of 16. From a humble start as a street peddler on the Lower East Side, Finn swiftly rose to become New York’s champion chess master and one of the country’s best blindfold chess entertainers. Finn’s chess success contributed to the rise of the chess scene in the Big Apple in the early twentieth century, and he fared equally well in business, parlaying his skills into a highly successful career. Along with a foreword by John S. Hilbert, this biography of Finn in America includes analysis of 96 of his chess games— most of them previously unknown or little studied— line drawings of game situations, and photographs.

xiii A Note to the Reader