The store will not work correctly in the case when cookies are disabled.
Artikelnummer
LXSOLMB
Autor
Andrew Soltis

Life and Games of a World Champion 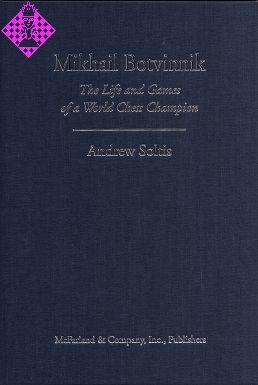 The games of Mikhail Botvinnik, world chess champion from 1948 to 1963, have been studied by players around the world for decades. But little has been written about Botvinnik himself. This book explores his unusual dual career--as a highly regarded scientist as well as the first truly professional chess player--as well as his complex relations with Soviet leaders, including Josef Stalin, his bitter rivalries, and his doomed effort to create the perfect chess-playing computer program. The book has more than 85 games, 127 diagrams, twelve photographs, a chronology of his life and career, a bibliography, an index of openings, an index of opponents, and a general index.

About the Author(s) Grandmaster Andy Soltis, eight times champion of the Marshall Chess Club, New York Post editor and Chess Life columnist, is the author of dozens of chess books. He lives in New York City.

256 Appendix B: Career Record Against Opponents