The store will not work correctly in the case when cookies are disabled.
Artikelnummer
LOKALMBCO
Autor
Gábor Kállai 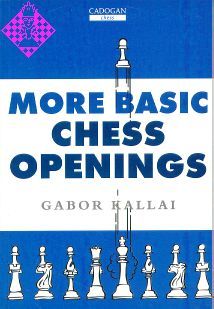 In this comprehensive book for players of all ages Grandmaster Kallai provides a straightforward, easy-to-use guide to surviving the maze of chess openings; covering all the popular modern openings starting with 1 d4, 1 c4 and 1 Nf3, as well as some of the lesser known alternatives to 1 e4.

Rather than present a mass of bewildering variations, as is common in most opening books, the author concentrates on developing a solid understanding of the ideas of each opening, so that readers can start each game with confidence. He arms the aspiring player with the fundamental grounding essential for achieving sound and promising positions from the opening, with an emphasis on formulating good plans for the middlegame.

This is the second volume of a two-part series covering every chess opening.

It deals with the 'Closed Games', that is to say all openings which do not start with 1 e4.

If White prefers a long positional struggle, a strategic battle instead of a tactical one, often maintaining a slight advantage to the endgame then the 'Closed Games' are for him! On the other hand Black, if he is ready for active counterplay and is aware that his lack of one tempo is even less significant than in the blitzkrieg of Open Games... well, then he also has no reason to fear the Closed Games! Most often White opens with 1 d4 and follows up with 2 c4.

If Black decides to castle by developing his bishop via the f8-a3 diagonal then he can choose from the Queen's Gambit, Queen's Indian, Bogo-Lndian or Nimzo-Indian Defences. If, however, he hopes to place his bishop on g7 then he has the Grünfeld Indian, King's Indian, Modern Defence and the Benoni at his disposal. For those who favour more offbeat setups, there are the Dutch and Old Indian Defences and various Gambits. If White wishes to avoid both 1 d4 and 1 e4, he can choose either the English (1 c4) or Reti Opening (1 Nf3). Other first moves are seen only rarely but should still be studied from Black's perspective.